I went to the Modernist Studies Association conference this August. It was at the University of Sussex, near Brighton. On the “Everydayness and the Spanish Civil War” panel, I presented on a scrapbook that Nancy Cunard assembled with materials documenting the Spanish Civil War and Republican exile in France. I also participated in Rachel Farebrother and Adam McKible’s seminar on the Harlem Renaissance and European Modernisms.

I went on one of the conference-organized outings, to Charleston, the home of Vanessa Bell and Duncan Grant, Clive Bell, the Bell children, and a variety of other artists and intellectuals who came to stay throughout the many years they lived there. In the house’s work studio, there were plates that had been designed by Vanessa Bell and Duncan Grant, commissioned by Kenneth Clark, the Director of the National Gallery. The series of plates featured “Famous Women.” The Charleston online collection features images of the Mme la Marquise de Caux, Adelina Patti, and Queen Mary plates.

The Tate Archive has an ad for the dinner service from a 1934 issue of The Sketch, which features more famous women:

(Kenneth Clark, incidentally, is not known for his feminism, as I learned reading Griselda Pollock’s Encounters in a Virtual Feminist Museum, in which she recalls  his book, The Nude: A Study of Ideal Art, was “the arch-enemy, or rather the first object of critical feminist analysis in the Women’s Art History Collective.” So perhaps we approach this project with some suspicion. )

The series reminded me, of course, of Judy Chicago’s Dinner Party, which includes a setting for Vanessa Bell’s sister Virginia Woolf: 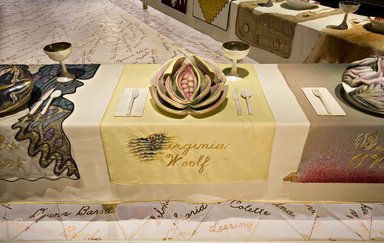 After my return to New York, reading Alan Rice’s Creating Memorials, Building Identities: The Politics of Memory in the Black Atlantic (Liverpool: Liverpool UP, 2010), I encountered Lubaina Himid’s Swallow Hard: The Lancaster Dinner Service, which was commissioned by Lancaster Museums, as part of a project that interrogated the city’s entangled history with the slave trade. Himid describes the project, in which she painted over ceramics she collected from Lancaster, Preston, and Whitehaven:

There are views of the city, plants that always grew here, there are maps, slave ship designs and texts from sales of these ships which took place in the pubs and hotels. I have painted pages from  account books, elegant houses, patterns from Mali , from Nigeria , from Ghana and all along the West African coast, these patterns like the paintings of buildings and vistas, boats and documents all cut across or weave in and out of the original patterns found on the old ceramics. On every tureen the faces of the unknown and unnamed black slave servants ask to be remembered.

The decorative dinner plate is a symbol of domesticity and prestige. By sculpting and overpainting these alternatives, Chicago and Himid offer a way of challenging these intertwined histories of capitalism, patriarchy, and transatlantic slavery, at the level of the everyday.