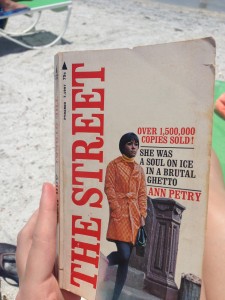 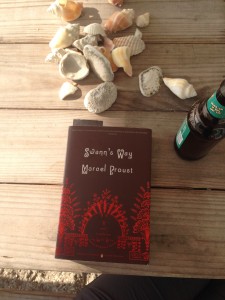 This summer I have been reading some books that are not directly related to my research projects (though there have been spurts of that kind of reading, too, particularly from this bibliography on black internationalism).

I listened to Margaret Atwood’s The Robber Bride as an audiobook on a drive to Florida. (I also listened to part of Louise Erdrich’s Round House and Graham Greene’s Brighton Rock, but something was wrong with the files, and they kept skipping ahead. I need to return to them.) Relatedly, I started to read Radio Benjamin. From Lecia Rosenthal’s introduction to Walter Benjamin’s writing for radio:

When adapted for or broadcast over radio, is a ‘literary’ text still literature? What happens to literature ‘after’ radio? How does the shift from the printed page to the airwaves recast notions of popularity and the public?

I’m sure Benjamin would have something interesting to say about the corrupted audiobook file.

While at the beach, I read Ann Petry’s The Street, and continued to read Lydia Davis’s translation of Marcel Proust’s Swann’s Way. I began reading Swann’s Way earlier this year, resolving with a friend to read 100 pages per month, à la this dreamy reading group he had read about years and years ago in the New York Times. Neither of us were very good at keeping up with that regime (even though 100 pages a month is totally reasonable), so I’ve just been reading Proust in fits and starts. At the beach, I was up to the “Swann in Love” section. Between that very Paris-centric section of the book and The Street, I had a very urban selection of beach reading.

I’m currently listening to another Lydia Davis translation, of Madame Bovary. My interest in Flaubert is inspired by this Joanna Neborsky print, A Partial Inventory of Gustave Flaubert’s Personal Effects, which I asked my parents for as a graduation gift. Neborsky’s illustrations of Flaubert’s domestic and sartorial objects prompts me to pay attention to the tactile, material descriptions throughout Madame Bovary. 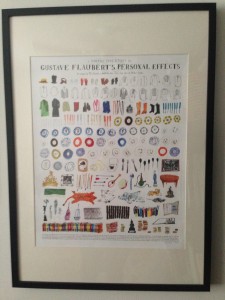 Lydia Davis received an honorary degree at my graduation this May, presented by Mario DiGangi, the executive officer of the English program. 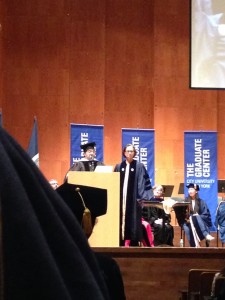 Lydia Davis receiving an honorary doctorate at the Graduate Center commencement, May 2015.

I read Ta-Nehisi Coates’s Between the World and Me. Coates has been compared to James Baldwin by no less than Toni Morrison, and the epistolary essays in this book of course remind the reader of Baldwin’s Fire Next Time. The Atlantic’s book club on Between the World and Me offers lots of food for thought. I particularly lit up at Coates’s descriptions of reading in the Moorland-Spingarn special collections at Howard. And having written half of my undergrad thesis on the Fire Next Time, and having considered organizing my dissertation around African American epistolary literature, I was particularly interested in the multiple address of the letter. Coates writes the letter ostensibly to his son, but publishes to a wider reading audience. Many examples from African American literature that I can think of use the epistolary form in this way–Langston Hughes’s epistolary poems, The Fire Next Time, even parts of Soul on Ice. The author turns the form of personal letter outward to the public in order to humanize the letter-writer and recipient, letting an outsider–particularly a white outsider to whom the experiences of blackness are unfamiliar–look in, and even stand in the recipient’s shoes.

Most recently, I finished Neal Stephenson’s Seveneves. Several social media contacts had mentioned the novel, and then it came up multiple times in Roy Christopher’s “Summer Reading” roundup, so I tracked down Emory’s copy. I very much enjoyed the iterative, problem-solving section of the book. Plot in short: the moon explodes; the novel is mainly set on the International Space Station as world powers respond to the implications of this cosmic event. I was not so into the sections involving genetics and racialization. Nonetheless, I was impressed with myself for finishing such a heavy book, and would recommend it to anyone interested in space, agile development, or world politics. I’d also love to read a post-colonial reading of the novel. The novel showed nations with established space programs had astronomically (get it?) more representation and influence in the plans undertaken, with gestures toward wider inclusion being largely interested in maintaining order. 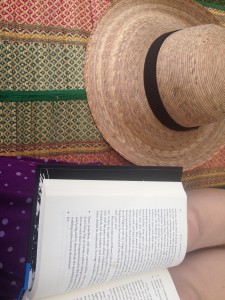 To be continued–I’ve still got a few weeks of summer reading left. On my list: Nell Zink’s Mislaid, and two recent books from grad school colleagues, Matthew Burgess’s Enormous Smallness, and Sara Jane Stoner’s book of poems, Experience in the Medium of Destruction.

Welcoming recommendations for fall reading, too.