I participated in a seminar on Modernist London and the Digital Map (organized by Stephen Ross, Katie Tanigawa, and Alex Christie, all from the University of Victoria) at the Modernist Studies Association conference in Boston in November 2015. Seminar participants were all invited to use Z-Axis mapping tool, to explore modernist texts set in London. The paper I circulated follows.

Jacob’s Room and Other Spaces

–yet all the while having for centre, for magnet, a young man alone in his room. (Virginia Woolf, Jacob’s Room, 129) 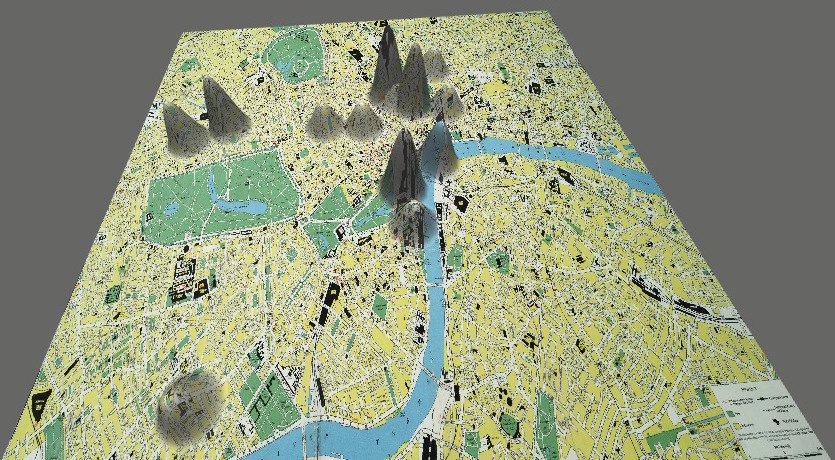 Z-Axis map of the full text of Jacob’s Room.

Uvic’s Z-Axis map tool is an invitation to read spatial references in novels in critical ways. The warped shapes on the maps make the places less legible, transformed by the literary meanings attached to the place in the novel. DH mapping projects that use tools like Google Maps or CartoDB produce visualizations that present a space and its meanings as flat, discoverable, conquerable, with all the weight of imperial history exerting on the Cartesian form. The Z-Axis tool transforms the map, making it less legible, and more suggestive, and prompts its interpreters to return to the novel to make interpretations and new meaning and readings of the text. Literary writing, lived experience, and history bring to bear layers of meaning on a place. The warped peaks on the Z-Axis map invite readings that take into account these intersecting meanings.

Putting Jacob’s Room on the Map

I put the plain text file of Jacob’s Room into the Z-Axis tool after removing just a few of the names the Named Entity Recognition script mistakenly recognized as location names (London, as recommended in the instructions, Jacob, Timmy, Rebecca), and then set it to mapping. The largest peaks seem to be around parks. I recall the discussion of monuments and memorials in Jacob’s Room, so this seems right. It’s difficult to read the map when it’s warped by the peaks, and I don’t know London geography quite well enough to interpret the significance. I find myself wishing for a text box beside the map, where one could see the textual references that produced the peaks.

In the list of location names, it was clear that many, many of the detected location names were not going to show up on the London map (or if they did, they shouldn’t have). In fact, many of the names were not location names, but nonetheless suggested a far-off location that was at the same time central to the British imperial worldview that produces the war and Jacob’s death in it: Latin, Mohammedan, Moorish, Roman, Persia, Greek, Chinese, Russian, Turkey, Indian Ocean, Italy, Greece, Gibraltar, Acropolis, Athens, Ireland, India, Newfoundland, Rome, China, Elgin Marbles, Parthenon (13 occurrences), Rangoon, Olympia (7 occurrences), Corinth, Salamis, Erechtheum, Athena, Hymettus, Pentelicus, Constantinople, Delphi, Euboea, Albania, Morocco, Venezuela, Achilles, Syrian, Lahore, Calcutta, Singapore, Piraeus, and so on. 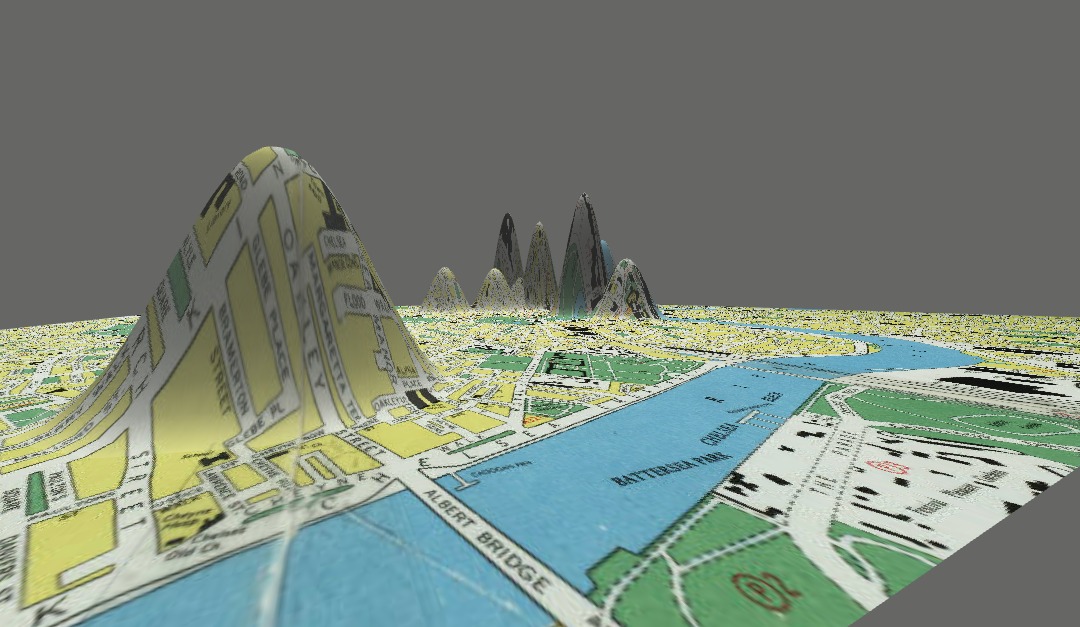 Reading Jacob’s Room on the Z-Axis

Mapping Jacob’s Room with the Z-Axis tool on historical maps of London offers a starting point for a spatial reading of the novel. Woolf plays with the spatial ideas of center and periphery throughout, with the experience of war-death represented in the clearing out of Jacob’s room by his mother and Bonamy, rather than from a trench scene on the continent. Similarly, public monuments to war and parades on city streets mark the complicity of everyday acts in the waging of war. For instance, Hyde Park is one of the peaks on the Z-Axis map. 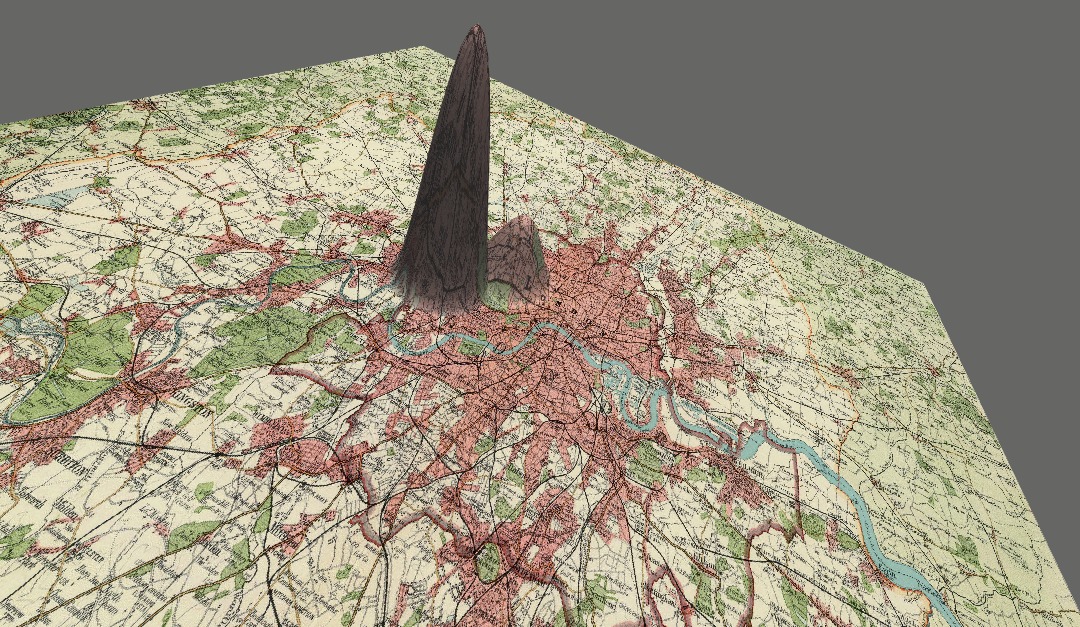 Woolf makes a quick allusion to a monument at Hyde Park:

“This statue was erected by the women of England,” Clara read out with a foolish little laugh. (233)

Kate Flint’s footnote in the Oxford edition informs readers about that statue:

The inscription on the statue of Achilles, at the south-eastern corner of Hyde Park, reads: “To Arthur, Duke of Wellington, and his brave companions in arms, this statue of Achilles, cast from cannon taken in the victories of Salamanca, Vittoria, Toulouse, and Waterloo, is inscribed by their countrywomen.” (253)

This reference to a war memorial erected by the women of England is an accusation. Woolf accuses the public memorial of contributing to war culture–as Jacob becomes more and more like a statue of himself.

Jacob’s trip to Greece, with stops in France and Italy on the way, is in line with this cultural, imperial authority that grants young men authority while also damning their flesh and blood to the violence of war. The statue of Achilles that stands as a war memorial; the Elgin marbles in the British Museum; the lessons learned at Cambridge build a direct line between the ruins in Greece and the culture of Britain that marches toward Jacob’s death.

Though the novel’s center is Jacob’s room in London, the text’s imperial gaze (to the British empire and historical empires) goes considerably further afield. If we map 80-90% of the novel’s text, there are no mappable locations in London detected.

The room at the center of the novel is surrounded by war memorials and parades, universities, Greek ruins, colonies and former colonies. The narrator declares that all of the action of the world takes place, “yet all the while having for centre, for magnet, a young man alone in his room.” The spatial arrangement laid out by the novel, then, ripples out from Jacob’s room: to the streets of London, public parks, and institutions of European civilization, especially the British Museum; to other regions in England, including the halls and chapels of Cambridge, and his mother’s home; to the seas surrounding England; further afield, to the empire, considering Home Rule in Ireland, India; to Europe, France, Italy, Greece; and the moon. Through all of these various places and scales of spaces, war and imperial culture pervades, and people attempt and fail to connect and communicate.

Letters mark these attempts at communication across the novel. As the narrator reflects, “they lace our days together and make of life a perfect globe. And yet, and yet…” (125). Betty Flanders is an ideal letter writer (“how interesting her letters were, about Mrs Jarvis, could one read them year in, year out, the unpublished works of women, written by the fireside in pale profusion” (123)), but Jacob leaves his mother’s letters unopened and in his replies omits the most important of his life experiences, in “mendacious” letters.

I think of DeQuincey’s English Mail-Coach as an intertext for Jacob’s Room. In DeQuincey’s text, the mail-coach departs from the center of the empire, London, bound for the peripheries of the island. The mail-coach delivers not only correspondence but news of the latest battles in the Napoleonic wars. At the center of this communication is an omission to the women of the empire, gathered to hear news of their sons who are at war, that their child is likely dead. At the end of the text, the mail-coach collides with a couple travelling in a vehicle, and the woman dies, another fatal encounter between domestic, gendered roles and imperial culture. Woolf, of course, insists on the interconnection of domestic and nationalistic oppressions. In texts like Jacob’s Room, Mrs. Dalloway, and Three Guineas, Woolf illustrates the links among the circumscribed lives of women in the domestic realm, and the circumscribed lives of men and boys whose existence hinges on their engagement with war. In Jacob’s Room, like in the English Mail-Coach, the empire circles outward from the metropole, and the mail system is implicated in the attempt at communication and the violence of empire:

the post, with all its varieties of messages, envelopes addressed in bold hands, in slanting hands, stamped now with English stamps, again with Colonial stamps, or sometimes hastily dabbed with a yellow bar, the post was about to scatter myriad messages around the world. (171)

These scattered, myriad messages circle around Jacob’s room at the center–by the end of the novel an empty room, whose occupant has been killed in a senseless war. Woolf addresses the war via the culture off the battlefield. She prompts her reader to ask how it is that the universe, expanding outward from Jacob’s room, organizes itself in such a way that he must die in the war.

The experiment of reading with the Z-Axis Tool is iterative, a process of intertextual reading between the novel’s text and the warped map and its transformation across the course of the novel. Andrew Thacker recommends multiple directions in reading the city in modernist texts: to “reconnect the representational spaces in modernist texts not only to the material spaces of the city, but also to reverse the focus, and try to understand how social spaces dialogically help fashion the literary forms of the modernist text” (4).

I imagine that the Z-Axis tool has been developed iteratively, adding and testing additional features as development goes on. In the spirit of iterative development, I offer a few user stories that might allow users to engage with the tool with greater nuance and critical insight:

I imagine that copyright may make some of these requests difficult (at least for those texts out of copyright that are preloaded in the tool). However, if the copyright piece can be avoided with a fair use argument, having access to the files providing data to the map would be extremely valuable. Having worked with NER scripts and Namedropper to map location names in a corpus of poetry, I am very curious to know what names are appearing on the maps; which place names haven’t been detected as such; and which place names have been associated with an inaccurate geographic reference. For instance, on my map of poetry references, the word “pit” was identified as the location “Pittsburgh.”

Moreover, I would be interested to think through references to places—the novel’s geographic imaginary—in comparison with the locations where the action of the novel takes place. I am also curious to know how, or whether, the different base maps affect the warping of the maps. For instance, what seems to be a peak around Hyde Park in the 70 to 80% range of the novel on the 1922 map (pictured in Figure 3), on the 1966 maps appears much different. Being able to view the place names that are represented on each version of the map would help me to interpret these differences. 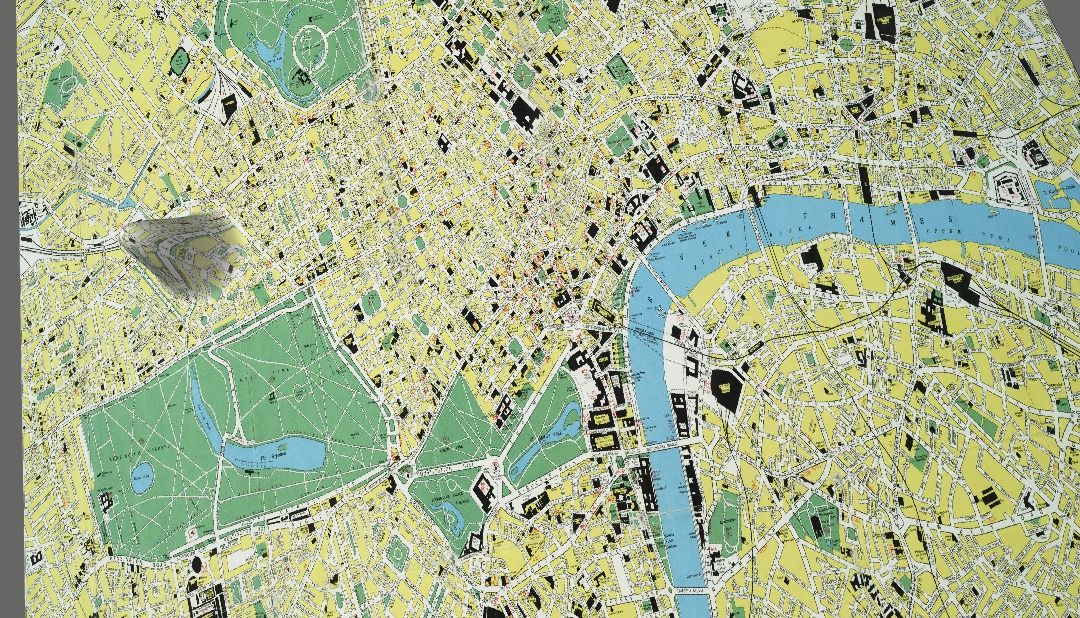